Elementary Solutions: a lot of heart

'When life gives you lemons, make sanitiser' became the mantra of Elemental Distillers during lockdown. Toast tells the story of how the true nature of a business and a community shone through adversity

At some point over the past few months it’s almost a given you’ve used hand sanitiser or witnessed others doing so. What you might’ve also noticed is often the first thing people do after rubbing it in is instinctually raise their hands to their nose. A lot of the time, the result is less than rewarding. But what if, on inhaling, you were gifted the aromatic scent of fresh gin botanicals? If you use Elemental Distiller’s Heads & Tails hand sanitiser, attached as a little hitchhiker to every bottle of Roots Gin for a limited time, that’s exactly what you’ll be treated to.

When the Covid pandemic started ramping up here in New Zealand, stores of hand sanitiser were quickly depleted and there was a desperate need to make more. To do so, you need alcohol, which was soon in short supply. “If anybody's going to make alcohol, it's going to be the distilleries,” says Elemental Distiller’s co-founder Ben Leggett. “And there may be few of us in the country, and we may be quite small, but it was kind of almost our national responsibility to make as much alcohol as we could.” 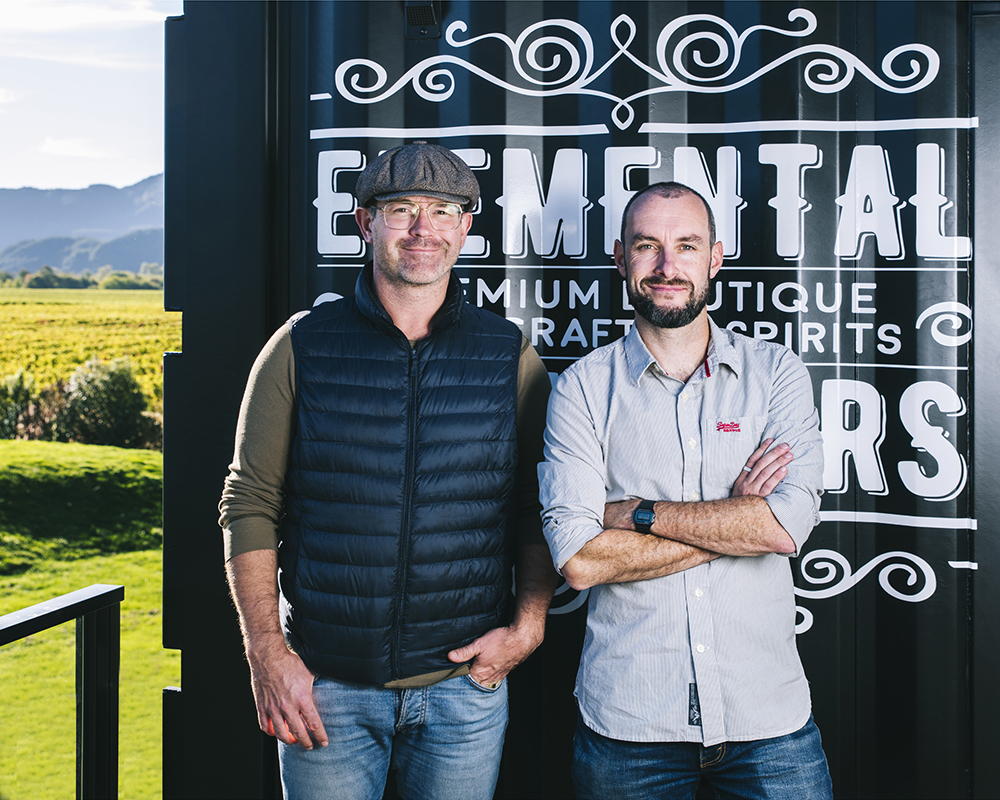 Elemental Distillers’ alcohol had a naturally occurring bonus. Ben explains: “In all distilleries, a run is separated into three parts, the heads, the heart and the tails. For each batch of gin, our still will run for, say, five-and-a-half hours. The whole time over that period we're getting gin distillate coming out.

“Every single one of the botanicals used in gin has components that are broken down into different flavouring chemicals or different hydrocarbons. The citric elements of each of those botanicals comes out early ie the heads, then the tails you start getting all of your  earthy components, all your barks, roots, mosses and those kind of vegetal notes. And in the middle, the heart, you get a little bit of citrus, a little bit of the earth and you get all your fruity and floral notes, so the heart is the best balance of your entire recipe. Every distiller collects just the heart for their bottling,” he says. “For us, as a craft distiller, the majority of our distilling run, though, is actually the heads and tails that don't make it into the bottle.”

Elemental Distillers have the right equipment to turn that by-product back into a neutral alcohol to be used again, but when it came down to the decision to start making sanitiser, they already had large volumes of heads and tails scented spirit at the ready. “And it smells lovely and aromatic – very, very pleasant, which is a big difference to most of the sanitisers on the market. And that's exactly why our sanitiser is called Heads & Tails.”

As the situation developed into lockdown, however, nobody could even get enough base alcohol to distill. That’s when Ben noticed his local Marlborough community really stepping up. “Everyone was working together to try to supply it. Nobody's looking at how they're going to make their money or anything like that. It was just people coming together, saying ‘what can we do?’” he says. “It was the middle of vintage here in Marlborough, and I was supplying all of the wineries with as much sanitiser as I could, but all of them in return were like, ‘what can we do to help you out?’ It was just constantly people coming together.”

That good karma seems to have returned. “We've been so impressed at how well the industry has bounced back here. It really feels quite buoyant,” says Ben.

This was evidenced recently at the first “Show Us Your Roots” cocktail competition, held at Christchurch’s The Glasshouse . “It was incredible the turnout we had,” says Ben, who hosted the event. Bartenders were tasked with coming up with a Roots Dry Gin cocktail recipe that spoke to their own foundations – something to complement the many New Zealand ingredients already shining in the gin: grapefruit from Gisborne, coriander seed from Hawke’s Bay, Motueka hops from Nelson, volunteer-foraged gorse flowers from Marlborough and kawakawa berries from Kapiti Coast. It went so well, there are hopes to take the competition regional, culminating in a Marlborough grand final.

As for Ben, he’s more grateful than ever to have come back to his own roots, after 14 years in the spirits industry in the UK and Europe. “I'm born and raised in Marlborough. I quite commonly find it very, very inspiring just being back in New Zealand. There's no shortage of people wanting to help, wanting to collaborate, be part of something.” Shows a lot of heart, one might say.