Around the world in 60 drinks

We have three copies of this fabulous Lonely Planet guide to give away, which will allow you to travel the world without leaving your liquor cabinet

No discerning traveller would be caught without a Lonely Planet guidebook stuffed into their rucksack. Now, the same authority on living local, street smarts and captivating customs have crafted an amazing guide for your drinks cabinet.

With more than 60 recipes from all over the globe, including classics such as the martini to less well-known curiosities like the Mexican michelada, this is more than just a drinks guide – it’s a damn good read that will transport you to the gallerias of Milan or the foothills of the Himalayas. There are also plenty of non-alcoholic beverages of wonder, such as horchata from Mexico and East African cardamom tea. 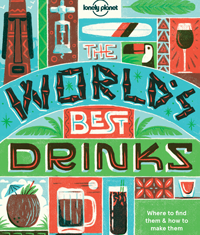 Appetite whet? Well, we have three copies of this fabulous book to give away. RRP $26.99

Click here to fill in your details and enter the draw.
Competition closes on Wednesday 10th of March.
Terms and conditions apply