It's party time at Liquorland, as they celebrate four damn good decades in business – and the brilliant people who serve you.

Anyone remember the old red and yellow Liquorland branding (or are we showing our age?). Forty years ago, Liquorland stores might have looked very different, but they've always been the go-to for good drinks.

“Each store is locally owned, and you know how much Liquorland staff and franchisees ‘bleed green’ by the time you’ve been in a store for more than a minute,” says Liquorland CEO Brendon Lawry.

“Our franchisees are as proud of you walking into their store as you would be having your friends over for dinner. It’s genuine care, not only for what they do today but to keep their business sustainable and exciting in the future. We have people who’ve just joined us through to some who have been with us for more than 20 years – and one whose tenure stretches back to those early days in the 1980s.”

Throughout Liquorland's Birthday Month we'll be popping in to stores around the country, hearing from their owner-operators reminiscing about the good old days through to today. This week: Joss Granger from Liquorland Howick in Auckland.

"Rosé wasn’t even heard of"

Liquorland has a saying: when you’re passionate about your job, you are “bleeding green”.

Joss Granger’s veins must be coursing with vibrant lime stuff after 21 years of service. The owner-operator is a walking/talking encyclopedia of beer, wine and spirits and can easily rattle off cocktail recipes.

She’s seen her store grow from selling well-known New Zealand draughts and lagers, a handful of wine varietals and a few well-known brands of spirits to the treasure trove of liquor that it is today. “I could talk about Liquorland all day,” she says. 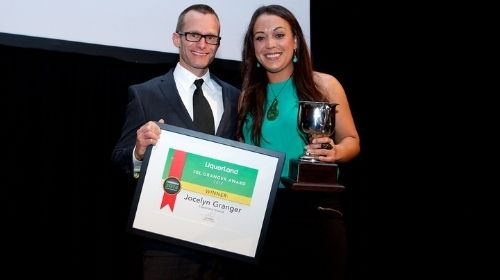 Joss first started working in her father Sel Granger’s Liquorland store in Auckland’s Howick in 2000. It is now hers. “So much has changed. We had only about 10 pinot noirs in the early days, and you’d be lucky to find one for under $50. Rosé wasn’t even heard of – we didn’t have a shelf for it.

“Now we have in-store tastings, which aren’t just about wine – we do cocktails, RTDs and gins. Every new drink needs to be introduced and celebrated,” says Joss.

As the company celebrates its 40th year, it’s clear that its longevity is strongly linked to employees’ enthusiasm. There are many ‘Liquorlanders’ with decades-long tenures, such as Joss.

Liquorland Howick back in the day