The unstoppable rise of IPAs

It’s not hard to see why IPA sales are exploding faster than a shaken-up six pack.

A hoppy delight with a bitter bite, it’s a beer that includes a diverse range of styles and currently accounts for nearly a quarter of all craft beer sales. According to the latest scanned Nielson data, IPA sales have grown 30% over the past year, with big-name players and backyard brewers alike experimenting with this powerful, popular beer variety.

If you’re new to exploring the world of IPA, it can be hard to know where to start with so much choice. Fortunately, we’ve tried plenty.

Here’s a selection of our favourite IPAs to get you started.

Enticingly golden and bright, Tuatara IPA features a powerfully fruity flavour with a balanced malt base. With citrus, tropical fruit and stone fruit flavours – plus that distinctive IPA bitterness – it’s perfect for washing down a good old Kiwi barbie steak.

Billed as ‘ruthlessly delicious’, this Lagunitas creation includes 43 different hops and 65 various malts. If you feel tired just thinking about that brewing process, relax – it’s as relentlessly refreshing as it is tasty. Hoppy-sweet, perfectly balanced, and wonderfully drinkable, Lagunitas IPA more than over-delivers.

Cloudy and orange – hence the name – this bold brew pairs mango, pineapple and orange flavours with subtle bitterness and a creamy texture. The result of a big, staggered triple dry hop, it’s a great match with fruit salad and vanilla ice cream. Seriously, try it – at a generous 7.1% ABV, you’re going to want to share it with a friend and have some snacks handy anyway!

Made with the triple threat of Waimea, Chinook and Taheke hops, Bone Yard IPA packs an intensely hoppy hit with a subtle array of flavours and medium maltiness. It’s an older-style recipe with some refreshingly modern additions, mixing the best of the old and new brewing worlds together into one tasty masterpiece. Big and bold, this dog has plenty of bite. 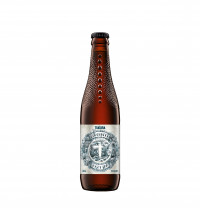