With the lighter beer category (1) growing by 24% (2), there is clearly a market for great-tasting beer with all the flavour but less alcohol. Drinkers are loving the Speight's low-carb Summit Ultra, and creating a no-alcohol option was the obvious next step.

Speight's Summit Zero was created in response to a growing demand for low and no-alcohol beer. Recent research obtained from Speight's supplier Lion revealed that eighty nine percent of people interviewed in an independent study believe they are responsible for their own health (3), and Speight's expects the new Summit Zero 0% to be a huge hit as we head into spring and summer. 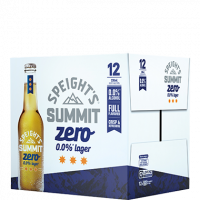