Incider info: Cider then and now

For a garden-variety fruit, the humble apple has a colourful history. Wonderfully versatile, they’re lauded as a healthy, natural snack. They’re also perfect baked into pies, coated in sticky toffee and doused in custard.

But most of all, they’re beloved as a crisp, refreshing brew.

Originally made from bittersweet crab apples, cider is a truly ancient beverage – so old, in fact, that nobody knows when or where it was first made. All we really know is how.

Which is lucky, because those generations-old techniques have lead to the bountiful harvest of cider varieties on offer today.

The process starts, of course, with apples – carefully selected, gathered and ground down in a process known as scratting. Traditionally, this was done using stones, or alternatively in a mill driven by water, horse or hand. The resulting pulp was then pressed, strained and transferred to vats or casks for fermentation.

Each region favoured a unique method of cider-making – French “cidre” was sweet and mild, while English varieties tended to be drier with a higher alcohol content.

Cider styles have continued to evolve over time, in wonderfully creative directions. Where once the craft of cider-making was constrained by the apples available, the methods on hand and local demand, today there’s a cider to match any taste. New ingredients are added, new techniques developed and new crowd-pleasers created.

Two brands that have captivated cider lovers all over the globe have recently unveiled fascinating new flavours. Crafted with the crispest apples, Orchard Thieves Blueberry & Lime (RRP$4.99) pairs the sweetness of summer blueberries with the zesty goodness of lime, while Rekorderlig’s Cucumber-Lime (RRP$5.99) concoction offers a refreshing cool burst of cucumber with a hint of citrus.

Each offers the taste of a timeless tradition – with a very modern twist.

After all, good things take time! 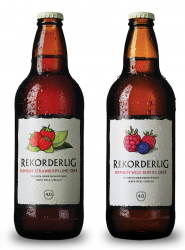