Pale ales and lagers are perfect summer companions, dark beers were made for cosy winter nights. In the middle there’s red and amber ales: crisp and refreshing but with a comforting hug of malt to keep you warm 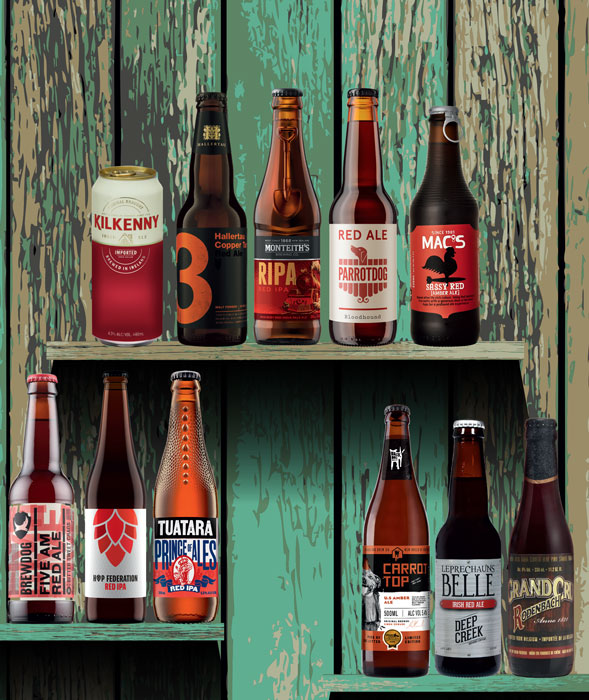 What is a red or amber ale?

It’s all in the name. Any beer with a reddish-hue – ranging from light copper to deep ruby – could be classified as a red or amber ale. All sorts of different beer styles fit the bill, including Irish reds, red IPAs and American amber ales.

What makes a beer red?

Barring the addition of ingredients like cherries or beetroot, the red tint you see in some beer styles comes from the malt. Beers that are brewed with very pale, lightly toasted malts will be pale coloured, while beers brewed with heavily toasted malts will be dark. Red and amber beers are made with various combinations of light and dark malts, and often have some unmalted roasted barley in there, giving a ruby tint.

That’s a tough one! Since red is a colour, not a flavour, it’s a bit like asking “what does yellow food taste like?” Depending on the style, and the whim of the brewer, they can be very rich, hoppy, or even sour. Generally speaking, a reddish hue tells us the beer is probably malt-forward, so flavours that are toasty, caramelly, biscuity, chocolatey and lightly fruity are often present. Another signature characteristic of red and amber ales is balance; they should be neither too bitter, nor too sweet, but just right.

Stemming from West Flanders in Belgium, Flanders reds are the most challenging (and many beer geeks would say, delicious) of all the red ale styles. Aged in oak barrels for at least a year, they have a complex flavour profile and a distinct sourness thanks to wild yeast and bacteria joining the fermentation party.

MATCH IT WITH: Soft, creamy cheeses or tart, fruit-based desserts, like cherry pie

If you love the bold hop flavours of IPAs but find them too bitter, try red IPA which can be rich and resinous, striking a beautiful balance between toffee-like malt characteristics and punchy hops.

MATCH IT WITH: Full-flavoured spicy foods and hearty barbecued meat

A fairly broad term, but generally it describes a maltier, amber-coloured version of a pale ale. American amber ales are often quite hoppy, whereas outside of the US they may be closer to English bitters. Either way, they should be clean and crisp with malt-driven flavours front and centre.

MATCH IT WITH: Burgers, meat pies, seafood, stews, pizza... you name it

Originating in – you guessed it, Ireland – these copper-tinted ales are light-bodied and easy-drinking, with toasty, caramelly malt flavours, a low hop profile and a drying finish. If you usually drink lagers, Irish reds are a good introduction to the world of red and amber ales.

MATCH IT WITH: Milder dishes like roast chicken, pork sausages or gruyere cheese